Tower of Terror by Don Pendleton
My rating: 4 of 5 stars

The series starts off with a bang as gonzo writer L.R. Payne (G.H. Frost) spins a wild tale with Puerto Rican terrorists, shady businessmen, Vietnamese agents, and ex-commies involved in a “Die Hard” type attack on a NYC skyscraper. Non-stop action with an exciting and exceedingly gory climax are highlights. Lack of character depth and a hurried ending are weaknesses. The mysterious Frost wrote most the the early Able Teams books and I like his out-of-control style. I have some of his other works in my TBR queue. Looking forward to reading them.

Email ThisBlogThis!Share to TwitterShare to FacebookShare to Pinterest
Labels: Action/Adventure

“Who Goes There?”, the sci-fi classic short and the source of “The Thing” movies was once the unpublished and lost novella “Frozen Hell”. Now available, this version of the story adds opening chapters that expands on the discovery of the monster frozen in the ice while keeping most of the later version narrative intact. It’s hard to say if this version is any better than the short story. The both tell a terrific story, just differently.

Email ThisBlogThis!Share to TwitterShare to FacebookShare to Pinterest
Labels: Sci-Fi

Review: Beyond the Outposts

Beyond the Outposts by Max Brand
My rating: 5 of 5 stars

An exceptional coming-of-age story telling the tale of Lew Dorsett, a boy who grows into manhood influenced by the quest to find his outlaw father, his high adventures living with Sioux Indians, and his relationship with his best friend Chuck Morris. I would have to say that this is now my favorite Max Brand book.

Email ThisBlogThis!Share to TwitterShare to FacebookShare to Pinterest
Labels: Western

My first visit to New Orleans recently gave me the opportunity to taste some authentic Creole Gumbo. Wow! It is super tasty. I had a bowl every day that I was there. The picture below is from Daisy Duke's in the French Quarter. 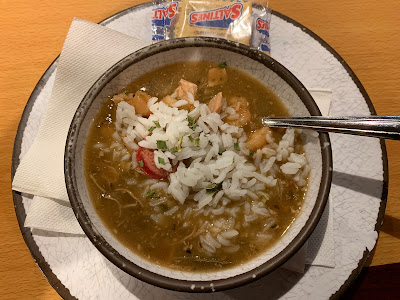 Detroit Combat by Carl Ramm
My rating: 4 of 5 stars

This early effort from “Doc Ford” writer Randy Wayne White transcends the action/adventure genre with solid prose and a crisp, interesting plot. Hawker, a former cop and now vigilante, is discreetly engaged by the Detroit Police to investigate a kidnapping ring that has been plaguing the city. Hawker teams up with an beautiful and apprehensive female police detective to set a trap for a the ring using a fake pornography studio sting, and predictably a relationship sparks between them. The exciting climax takes place in a replica of H. H. Holmes’ “Murder Castle” which I thought was an imaginative touch. I bought the complete 11 book series at a rummage sale and was thinking of selling them. Now I think I’ll read them first.