Review: The Captain Must Die

The Captain Must Die by Robert Colby
My rating: 5 of 5 stars

A 1959 Fawcett Gold Medal revenge caper classic telling the story of three court-martialed Army deserters, recently released after twelve years in Leavenworth, who decide to seek vengeance on their former captain who they blame for their imprisonment. Gregg, the captain, is now a businessman who hoards money in a secret room while trying to keep his distressingly ruined marriage with the lovely Madge intact. The three felons, led by psychopath Brick, devise a plan to torment and rob the captain with disturbing and surprising results. A tightly plotted gem, grim and dark with a fascinating cast of damaged characters. I’ve been reading a lot of Colby’s work recently. He’s a fine writer and this the best book that I’ve read by him thus far.

Buy the ebook from Wildside Press.
Posted by Ed McBride No comments:

Apache Rising by Marvin H. Albert
My rating: 5 of 5 stars

A taut and violent short western that finds young Jess Remsberg, consumed with avenging the rape and murder of his wife, scouting for an Army wagon train that finds itself outnumbered in a brutal cat-and-mouse battle with a band of merciless Apaches. The tension remains high as the brilliant Apache warlord Chata matches wits step for step with young and ambitious Army Lieutenant McAllister who is close friends with Jess. I really liked how their friendship was portrayed. The love interest is a married woman victimized by Chata’s men, and mother to a half-breed whose abusive husband scorns her. A superior and very brutal military strategy tale, encapsulated within a revenge story, with a little romance thrown in. Recommended.


View all my reviews
Posted by Ed McBride 1 comment: 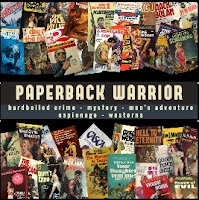 My friends Eric and Tom who run the terrific blog Paperback Warrior started a podcast a few months ago that I dig just as much as their blog. Each episode typically features a deep-dive segment on a particular subject or author, a couple of book reviews, and maybe an accounting of their recent bookstore adventures or paperback finds. I recommend giving them a listen on Spreaker or any of the common podcast providers that you may be using. It's well worth your time if you have any interest in vintage paperbacks. I look forward to their new episodes released every Monday, although they are taking a break during the holidays which gives you a great opportunity to catch up on their older episodes.

Here a link to The Paperback Warrior Podcast on Spreaker
Posted by Ed McBride No comments:

The Durango Kid - The Fighting Frontiersman (1946)

An okay B-Western that doesn't compare very favorably with the Roy Rogers or Hopalong Cassidy films. Grizzled prospector named Cimmaron stumbles upon the long lost Santa Ana's treasures then blows it by tipping off a saloon girl named Trixie who then tips off a gang of criminals that kidnap Cimmaron and hold him hostage until he spills the beans about where the treasure is hidden. Trixie then inexplicably sends a note to Ranger Steve Reynolds, played by Charles Starrett, and his sidekick Smiley Burnette, oddly played by an actor by the same name, to rescue Cimmaron. Steve has a secret identity of the Durango Kid and during his rescue attempt he changes into a Durango Kid outfit and pretty much continues what he’s been doing. Not sure why he feels he needs an inconvenient secret identity. I could have done with less musical numbers, less wooden acting from Starrett, and less of the stooge-like antics of Smiley.
Posted by Ed McBride No comments: 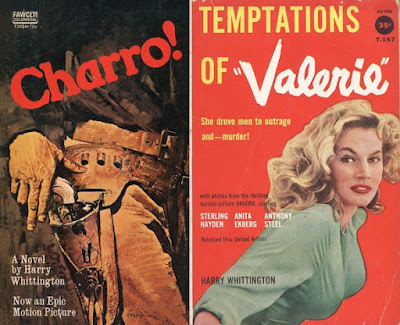 Harry Whittington wrote a couple of movie tie-ins that I'm aware of - "Charro!" and "Temptations of Valerie". I created ebooks of both of these from scans that I found online. I'm pretty sure that the movie studios that own the rights to these are not interested in them ever being reprinted, so here they are. In the name of preservation. Enjoy!

Writer Paul Bishop has a terrific post on his blog regarding Charro! and the eye-catching Ron Lesser cover art called Wandering Down The Rabbit Hole that I highly recommend reading.

The movie "Valerie" can be found on YouTube by searching for "ekberg valerie". The description is in Spanish although the movie is English.

Mountain Girl by Cord Wainer
My rating: 4 of 5 stars

Mountain Girl, an inexplicable title, tells the story of hard-boiled Rick Case who arrives in a remote mining town in Colorado to run a friend’s general store and is immediately beaten to a pulp. It turns out that the mine is owned by a cruel and ruthless woman named Crystal who has control of the whole town. Rick quickly falls in love with Jan, the wife of the mine boss, who he accidentally kills. Turn out that Crystal is illegally exporting uranium from the mine and an FBI agent named Wilson is quietly observing while posing as a tourist. Since Rick has the gumption to stand up to Crystal she decides that he would be a fine new mine boss, and Rick takes the job in order to assist the FBI investigation. This sets the stage for a terrific thriller with Crystal becoming increasingly psychotic and Rick playing both sides while keeping his romance with Jan intact. A unique and engaging story from the dependable Thomas B. Dewey writing as Cord Wainer. 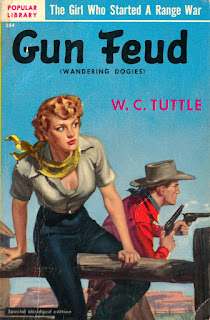 An out-of-print W. C. Tuttle book that I converted into ebook format from a scan. It's not a Hashknife Hartley and Sleepy Stevens novel. All the cowboy lingo durn near busted my spell checker! My short review is below:

Bookkeeper Orville Woodruff receives an 15 year old letter indicating that he is the heir to a lost gold mine in Arizona. He quits his job and travels to the location where he meets the lovely Norma and crime-solving cowboys Micky and Spook. Tuttle weaves a complex plot with kidnappers, cattle rustlers, Mexican bandits, gold mines, and a wealth of interesting characters. A fun read with a hard-boiled mystery plot and plenty of humorous touches, sort of a cozy cowboy mystery.


*** Bonus: Here are two old radio shows with narration by W.C. himself.

Hashknife and Sleepy in The Double Cross and The Range War from 1950.
Posted by Ed McBride No comments:

Email ThisBlogThis!Share to TwitterShare to FacebookShare to Pinterest
Labels: Downloads

Review: The Legend of Roxy Doyle

The Legend of Roxy Doyle by J.R. Roberts
My rating: 4 of 5 stars

The first book in the Gunsmith Adult Western spin-off series tells the origin story of Roxy Doyle, a.k.a Lady Gunsmith, a pistol-packing beauty in search of her estranged bounty hunter father. The author does a nice job of portraying the young Roxy as being a bit rough around the edges, in contrast with the mature Roxy, a polished and confident gunslinger as he navigates the two timelines that make up the novel. The dialog driven narrative will be familiar to readers of the Gunsmith books, although the female perspective only serves to make the three required sex scenes seem even more nonessential and awkward. I really liked the surprise appearances of Belle Starr, and Frank and Jesse James and how they were integrated into the story. The plotting, pacing, and dialog are the author’s strong points and they are on display in this short novel making it hard to put down. An easy and entertaining read.