Saddle Sinners by Harry Whittington
My rating: 5 of 5 stars

One of Whittington's famed missing 38! Objectively, Whittington's novels published in the 1960s by mainstream publishers such as Fawcett Gold Medal, Avon, Ace, etc. are more conventionally plotted and the writing is more polished. What they lack, however, is everything that you will find in this Greenleaf/Corinth sleaze noir, which is narration that is relentlessly edgy and full of inside voice. The YA Twilight series has more sex than this one and yet these early 1960s publishers were hounded and eventually jailed for publishing novels such as this. As I've written before when reviewing other Whittington sleazers, this genre, and the anonymity of writing for Greenleaf, freed him to write brutally honest crime/noir novels that he couldn't publish with those mainstream publishers. Although tame by comparison with what is published now, this 1964 novel shows what Gold Medal novels would have been like if there had been no censorship. I'm giving it five stars because I loved it, but also because Whittington broke the molds and gave us a crime noir we wouldn't have had otherwise. He was one of the few writers who took his sleaze assignments seriously. And it shows. Block and Westlake were great writers, but read their sleazers and it is obvious that most of the time they were taking the piss. Not Whittington. Back then he did what noir writers do now, he made it dirty. So what do we have in Saddle Sinners? A gigolo drama at a dude ranch, plus a hostage scenario and a heist, and a frigid wife awakened. Plus plenty of inside voice narration to show how F'd up all the characters are. Highly collectible, so it won't be cheap, but it is well worth the price if you can find a copy.

Crack-Up by March Hastings
My rating: 4 of 5 stars

Sally Singer published several well-written vintage lesbian pulp novels under the pseudonym March Hastings which seem to be gaining some well-deserved traction since being recently reprinted by Cutting Edge Books. Here a neurotic, selfish, and sexually repressed young wife named Karen goes bananas after after her cranky husband Steve, a race car driver, is rendered bed-ridden and impotent after a crash. Not surprisingly some sexual exploits and experimentation ensue. Her relationship with Jean, whose snarky banter crackles with sarcasm and droll self-mockery, is the highlight of the book and I kind of wished that the novel were about Jean instead. The ending, dictated by the sexual climate of the times, was a bit of a clunker although the writing and dialog make this well worth reading. Four stars.

Available from Cutting Edge Books. I read it in the Vintage Sleaze collection. 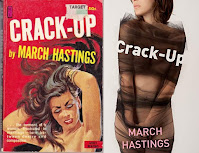 Posted by Ed McBride No comments:

Kill to Fit by Bruno Fischer
My rating: 2 of 5 stars

A traditional mystery rather than a noir. A big group of people are out to a lakeside estate for a fourth of July weekend and one of them is murdered. Whodunnit? Rick Train, our narrator, must solve the crime. Fischer writes smoothly and with impeccable craft, but this one moves pretty slowly, it's almost halfway into the novel before the murder occurs. Plenty of plot complications and twists and investigative activities from there and that picks the pace up to the end. I'd recommend it for mystery lovers, but if your taste goes to noir thrillers you could skip this one.

Email ThisBlogThis!Share to TwitterShare to FacebookShare to Pinterest
Labels: Crime

April North by Sheldon Lord
My rating: 2 of 5 stars

Another early Lawrence Block book, writing here as Sheldon Lord. The setting is small town Ohio in 1960. Good girls don't do IT. But this is a coming-of-age morality tale so April goes all the way in the backseat of her boyfriend's car and suffers the consequences. She loves him and is already planning marriage, babies, and white picket fences. Next day he dumps her, spreads the word around school that she put out, and other boys start calling her because they want to do IT and April does IT. Her reputation ruined, April's life spirals downward . . . Ok, this is Lawrence Block ,so it is readable, but that's about the best I can say. Shallow psychology, cardboard characters, plot-driven actions. The sex scenes are a bit better than his earlier books. Not graphic, but well-described with fewer euphemisms, except for the climactic moments, which are usually described as "and then it got better and better and better." No crime in this one. Just vintage-sleaze filtered through 1950s morality. Block's description of how he came up with the character name and the title is pretty funny: A friend created a character named June East as a play on Mae West; Block liked that, hence, April North.

Shabby Street by Orrie Hitt
My rating: 4 of 5 stars

This was Orrie Hitt's fourth novel and it's a serrated knife. Johnny Reagan is the first-person narrator and Hitt gave him a hard-boiled style and used it to show what a right bastard Johnny is. He has zero redeeming qualities - unless you count how hard he works at being a lying, cheating, thieving SOB -and he's proud of it. So this is a great little joy-ride with Johnny at the wheel. As usual with Hitt's books we get the inside look at some scammy business. This time it's insurance agencies selling crap policies. Johnny starts up a couple of agencies, each one to bail-out what he stole from the last one, so there's the plot driver of him constantly having to raise cash to replace money he stole. Then there's Janet and Julie and Beverly and Cynthia. The first two he wants, the third he marries, and the last is sort of his partner in crime. Plot complications galore as Johnny chases and juggles his activities with these four women. Really enjoyed the edginess in this one. It's kind of what was lacking in some of the other Hitt books that I've rated lower. Has the same corny metaphors, the kind that clunk up the other books, but the difference here is that the rest of the writing is clean and tough and driven by a strong voice.

View all my reviews
Posted by Steven J. McDermott 1 comment:

Review: Tears Are For Angels

Tears Are For Angels by Paul Connolly
My rating: 5 of 5 stars

Wow! Noir masterpiece for sure. How did did this not get mentioned in the books on crime and pulp fiction by Horsley, Haut, O'Brien, and Ritt? How did this not get made into a movie in the 1950s?! Soon as I finished this I went back and read it again, hardly believing that it could be as good as it seemed the first time and found myself riveted once again. The beginning is a stone cold killer. Harry London, down as far as a man can go, out in his hermit cabin bingeing on white lightning and shooting at cans while trying to visualize the face of the man he wants to kill. And up drives Jean Cummings to throw down the challenge. After a sharp opening battle between them, the rest of the story comes churning out. How Harry got down so low, his wife's murder, the vengeance he seeks, and the devil's bargain he and Jean strike-up to bring about that vengeance, which she also seeks, to fruition. The build-up is twisty and tense and the unraveling ending sequence does not disappoint. This is a great one that needs to be rediscovered and appreciated by fans of crime/noir fiction.

Intimate Nurse by Kimberly Kemp
My rating: 3 of 5 stars

The uneven quality of the writing - prose that lapses at times into cliches and extended expository telling - had me speed reading a fair amount of the time, but otherwise this is an interesting noir about a private nurse who moves in with a family and takes over. The writing is at its best while our nurse is plotting how to take over the household and when she is manipulating and controlling the family. Yes, she has sex with them all, but it is described in that censorship era way that has a new chapter starting just when things get steamy, meaning, you turn the page and that sex scene you were reading is ancient history.

The Hunter by Richard Stark
My rating: 4 of 5 stars

Wow, Parker is such an amoral bad ass! His entrance into the city, walking across the George Washington bridge, and then his little crime spree to raise cash, is one of the best character introductions, in any genre, that I can remember reading. As anti-heroes go, you have to love the way Parker just gives The Outfit the middle finger "you're going to pay me whether you like it or not." I'd say he takes them out a bit too easy in the last third of the book, but this is entertainment reading, so, just like when watching an action movie, willing suspension of disbelief is what you have to do. The ending was a nice surprise, and I'm guessing not there to begin with, but changed when the publisher wanted more Parker books. Great start to the series. In case you didn't know, this is Donald Westlake writing as Richard Stark. Also made into a brilliant and brutal movie - Point Blank - which was one of the first neo-noir films. Lee Marvin played Parker to the hilt.