Native Girl by Harry Whittington
My rating: 4 of 5 stars

Coles can’t help falling for his best friend’s wife in this steamy tale of sexual obsession. The action takes place in pre-statehood Hawaii, a mysterious place filled with passion and sensuality that practically sweats off the pages, especially during the drunken luau where the fires burning between Coles and the seductive Lani reach their peak. As expected, everything goes horribly wrong in a hurry and Coles find himself trapped by the manipulative Lani as things continue to spiral out of control. Another fine page-turner from Harry Whittington. Recommended.

The Hostaged Island by L.R. Payne
My rating: 4 of 5 stars

The second book in the series is conceptually strong, telling the story of a group of violent outlaw bikers working in cahoots with a rogue Soviet agent to capture and hold for hostage Catalina Island off the coast of southern California. The narrative shifts from the incursion of Able Team and their efforts to rescue the 1500 local residents of the island that are being held captive, the captives themselves plotting a rebellion against the bikers guarding them, and a small band of locals that have evaded the outlaws and are planning their own attack. Tightly plotted and fast moving, this a wild ride of a book, although some may be turned off by the copious amounts of violence and gore inherent in these types of books.

Hell In Heaven by Lee Goldberg
My rating: 2 of 5 stars

The Dead Man: Hell in Heaven finds Matt Cahill on the road where he finds himself trapped in a mysterious village where he is hailed as a hero, a role that Matt is unwilling to accept - he only wants to get the hell out of there. A linear, albeit wacky plot keeps the book moving at a nice pace. It bothered me that Matt was oblivious to the strategy of playing along with the hero role until he found a means of escaping, but that would have trashed the plot which already has its share of holes. These books have faults, however they have all been quick and entertaining reads. I’ll continue to read them when I’m in the mood for bite-sized horror novellas. 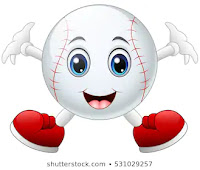 When I was a kid and crazy about baseball I used to spend a lot of time playing statistically accurate baseball dice games that were based on actual baseball stats, both current players and players in the past. Bear in mind that this was well before this type of thing was available with computer or video games. Anyway, I found last year's MLB stats online and wrote a program to create a game with statistically accurate player cards for every 2018 MLB team. Three six-sided dice are required to play. Pitching is boring and messes up the player stats so no pitching is involved. Here's a link to the player cards.

Update: The 2019 player cards are now available.
Posted by Ed McBride No comments:

Ring of Knives by James Daniels
My rating: 4 of 5 stars

The second book in the series chucks most of the backstory and characters from the first book and sends Matt Cahill on a road trip to try to determine why he was resurrected, why people around him are prone to looking rotten to him then inexplicably turning evil, and the haunting of a spectre that he calls Mr. Dark. Cahill ends up at an horror infested mental hospital where the story turns into a sort of an action book with Cahill fighting evil orderlies and rescuing a pretty girl. The story is more focused that the first book and I actually liked it a bit better.

Face of Evil by Lee Goldberg
My rating: 3 of 5 stars

The first novella in this multi-book series can be somewhat excused for all the necessary backstory that introduces Matt Cahill, his love interest, and his best friend who is a complete jackass. This encompasses the first two thirds of the book and is entertaining enough. The final third of the book sets up the horror element and it runs off the rails with some hasty plotting and gratuitous gore. I liked it well enough to look forward to the next book in the series, which was probably the intention of the author anyway.

Day of Mourning by Stephen Mertz
My rating: 5 of 5 stars

Great opening with Bolan fighting terrorists and sharks underwater, ala Thunderball, while retrieving a sunken nuclear warhead. Author Mertz continues to pull out all the stops as Bolan investigates a major plot to attack his base of operation, Stony Man Farm, taking him to Washington D.C. and violent encounters with hired assassins, more terrorists, and for old times sake, the Mafia. Meanwhile Able Team is is heading into a deadly trap in Asia with no way to communicate the danger. Bolan hopes to finish up his detective work, get revenge for the killing of one of his men in an earlier raid that also took out communications, and prevent the looming assault on Stony Man in a race against time. The book is a complete knockout. An outstanding entry in the Executioner series.

My reviews of the other two books in the trilogy:
View all my reviews
Posted by Ed McBride No comments:

Massacre at San Pablo by Lewis B. Patten
My rating: 4 of 5 stars

This short novel covers a lot of bases. It’s a coming-of-age tale with Apache attacks, humble Mexicans, gunfights, bounty hunting scalpers, and a forbidden romance. Young Mark Atkins is consumed by revenge after the brutal slayings of his parents and then his adopted parents. The violence in his heart sends his budding romance with the perceptive Susan askew and now Mark has to deal with unrequited love on top of his quest for revenge. A fast-moving and interesting plot with solid characterizations make this a real page-turner.