The Crime and Corruption Novel MEGAPACK from Wildside Press is a real bargain. Four novels for $0.99. Available for Kindle  or other formats at Wildside Press. If four novels seems overwhelming then the essential reads are arguably Run, Brother, Run! and Kiss Me Hard. 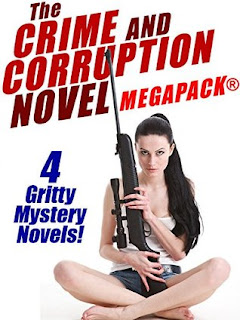 A Season For Violence by Thomas B. Dewey
Dewey strays from his comfortable crime novel genre and attempts a drama involving a large cast of country club politicians and their powerful allies whose lives become unhinged during a scandal involving one of their own rich kids, and an upswing in drug trafficking. The novel starts out slowly - introducing many characters, then picks up steam a bit as the the lives of the characters begin to intertwine. Dewey manages to tie up the loose ends to a satisfying conclusion, although too many characters and an unfocused, meandering plot drag this one down.

Run, Brother, Run by Thomas B. Dewey
A terrific short novel from 1954 that was recently brought back into print by Wildside Press. Like the best of the ’50s paperback pulp fiction, the story has a lean and propulsive plot with plenty of hard-boiled dialog and violence. What set it apart for me is the originality of the plot, the well-drawn female characters, and a couple of twists that totally surpised me. A top notch gem that clearly deserves to find a bigger audience.

Empty Saddles by Burt Arthur
Marketed as a Western, the novel is instead a character study of a young lawyer named Joe who has recently returned from World War II, his difficulties getting reintegrated into his former small town life, and his quest to unseat the popular, albeit corrupt, politicians running the town. Joe has two love interests, the former flame and girl-next-door type Mavis, and a young and neurotic ingenue with the wonderful name of Avril Fawcett, whose fathers both happen to be corrupt politicians. The novel is a solid small town drama, perhaps a bit slow moving, with interesting characters and prose. It wasn't what I was expecting, however I liked it a lot.

Kiss Me Hard by Thomas B. Dewey
The short novel starts with a bang as an alcoholic piano player inadvertently rescues a missing heiress from carnival sex slavery while being pursued by an extremely angry husband. Doubts about the authenticity of the attractive and damaged young heiress preclude an eventful trip across the country in an attempt to return her to family - who don't seem very enthusiastic about the return of the missing sister. The protagonist was exceptionally well portrayed with insights into his blatant alcoholism, self-doubt, and loneliness as his relationship with the helpless young heiress evolves from good samaritan, to responsibility, and then to love.